One of the most treasured stories in Canadian folklore is that of Anne of Green Gables by Lucy Maud Montgomery.  It’s the coming of age story of a determined redhead who was mistakenly adopted into a farming family in PEI and has been told and retold through books and other media such as film, television and even live productions.  Over a hundred years later, numerous Toronto restaurants are writing their own stories in an effort to capture the essence of Canadiana. Montgomery’s is one of these. Although I can’t attest to the origin of the name (it certainly isn’t that of the owners), I could use my creative licence and suggest that it is may be named after the famed author.  So, although I’m sure she could pen a much better story than I, I’ll attempt to summarize the experience in my own literary style:

There’s a restaurant called Montgomery’s.  It’s a modest place and apparently purposely so. One could easy walk past the meager storefront searching for a place to dine.  The interior is a bit meager  highlighted by a rather large and seemingly cozy rug/tapestry hanging along one wall and tables and chairs that looked like hand me downs from an estate sale. With the plain white walls it looks a bit like a prison visitation room.  Once seated, you may hear a fable from the waitstaff justifying a thirty dollar price tag for an Italian beer. If you are really lucky, in surroundings lit only by the small candle flickering on the table you may hear the tale of Snackies the Omish cow.  Snackies was aptly named by a 2 year old on a farm that, despite, her tender age, was a bovine clairvoyant who knew that one day, her farmyard friend would adorn a plate in downtown Toronto served medium rare.  In the original story, the name of the cow remained a secret, only to be shared with those who were curious or wanted to know the name needed to canonize this cow into culinary sainthood.

The trout, sadly, did not receive the same attention. It was simply called trout, named in a fashion much like the majority of the characters (ie. bear, skunk and muskrat) in the Franklin cartoon.  Perhaps the two year oracle would have named it Fishy or Swimmy but alas one will never know.  The only other protein of mention was an small egg custard who’s bite was bigger than its bark in that it was full of sweet, salt and unami flavours. The bread took a dip in the lentils or camouflaged itself behind vibrant green butter. The chain gang of vegetables were housed on white plates and bowls as bleak as the walls themselves. The lettuce drowned in its sorrows and the beans, carrots and potatoes were particularly sour to be there. The tarte tatin, however, was the apple of everybody eye.  The entire group, when together, made for a fun and eventful adventure despite being housed in a concrete tundra. The end. 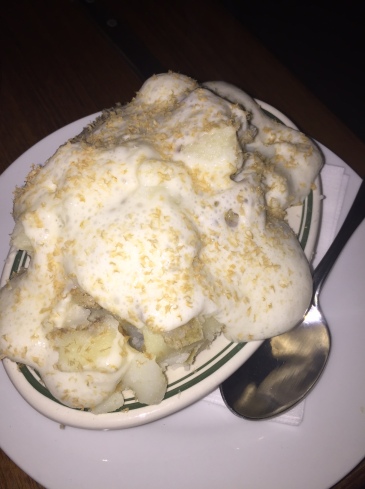 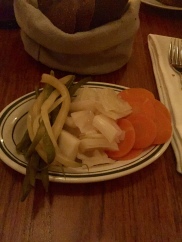 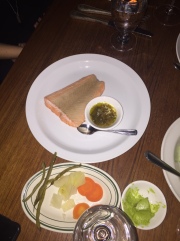 I’m a bit behind in my reviews so the menu has changed often since I went a couple of months ago.  That said, the concept seems to have remained the same; seasonal vegetables with a few proteins served in a fashion (ie. plain) which forces the food to do the talking. That said, the cup of lettuce seems to be a consistent character in this story and is worth a try although you probably won’t dream of bathing in the broth at night.  All in all, the food was not mind blowing but it was good.  The custard was divine and Snackies represented. The vegetables were a bit hit and miss but all around good.

The concept of the restaurant, from the shabby store front to the ugly floors and odd rug/tapestry thing on the wall, bothered me. Some people have told me this is purposeful and if it is I apologize for not understanding.  Maybe it’s like that painting at a museum I stare at thinking “WTF”, but I perceive more as “we couldn’t be bothered so let’s pretend like we meant to do it”.  From a decor perspective, to me there is a difference between industrial and correctional.

I’m a bit perplexed at the lack of social media coverage.  Sure, the opening was covered by Toronto life and Blogto but other than that the normal review sites have been as barren as Montgomery’s walls. There are only 9 yelp reviews and zomato hasn’t registered enough voters to even have a rating.  This is not always indicative of overall noise but it’s a bit odd.  I do, however, notice that they do take time to respond to many of the reviews, good or bad.  They are also closed on Sunday and Monday now which could be interpreted in a number of ways.  I guess we have to wait and see if this place will turn out more like Anne of Green Gables or the Pat of Silver Bush.

Given the story of Snackies the cow as the lead character among a diverse cast of plain, misunderstood and diverse characters all set in a drab decor, if I was a literary critic I would say Montgomery’s can best be described as  a tale in which AA Milne meets Orange is the new Black.