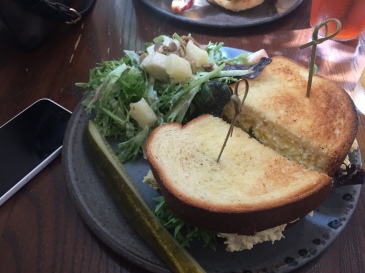 I often stay at the Eaton Chelsea so I’ve been watching the completion of Duke’s Refresher and Bar with great anticipation. One of at least 3 restaurants associated with the Aura condo complex at Yonge and Gerrard, Duke’s promises a “Coyote Ugly” experience with good food and a great atmosphere.  I must admit, like any warm-blooded male, the thought of being drenched by a fire hose by a woman standing on top of a bar is somewhere on my bucket list.

I dropped in prior to another engagement I had to check out the place and all the elements were in place.  The music was loud, the beers were pouring, the decor was loud and the barkeeps looked like they could have been on the set of the movie itself. I planned to drop by later with a buddy of mine to grab a few drinks, eat a bit of food and catch the rest of the football game.

We got there a little after 10 and the place was packed.  The layout boasts  a number of tables and we were seated at a couple of chairs along the long bar.  We were immediately warmly greeted by a  bartender and manager who welcomed us to Duke’s. We were presented the menu which includes over 40 tap beer ranging from domestics to craft ales. One of the unique aspects of this place is the ability to order 3 ounce samplers of any of them for a dollar and change.  We did exactly that, ordering 7 or 8 craft beer to start.

The beer were served quickly and in the correct order.  Other than that, the conversation was a bit painful.  At this point I need to clarify something.  If you’re picturing the bartender looking  like Penny from the Big Bang Theory, you’d be wrong. Instead, he was like Zack Johnson, her on and off boyfriend on the show. Every beer I liked was his favorite and with every comment I made about the beer (for example, the hoppiness  of the Amsterdam Boneshaker) was answered with one word…”Interesting”.

While looking at the menu, I noticed the Einstein club, which allows patrons to buy a 24 oz stein for $20 which stays on the shelf ready to be filled anytime they come in.  They are also made privy to future special engagements available only to club members. It’s a concept I’ve seen in a number of Michigan bars, so I wondered if Duke’s  was based on this American model.  So, I asked Zack about this and he said  “I thought it was Detroit but you might be right, I think it was Michigan”.   In the end,  despite being opened less than a week, the Einstein club was full and I was unable to reserve one of the many glasses on the shelves behind the bar.

Looking around, about 75% of the staff were male.  I have no problem with male waitstaff, but my  bucket list dream of being doused by water in a bar was…well…extinguished.  Unfortunately, it didn’t mean that other aspects of Coyote Ugly wouldn’t come into play later.

After settling on a pint of Beau’s Tom Green Milk Stout (which is quite delicious), we ordered a couple of things to get a feel for the food menu. The menu focuses on traditional bar foods such as wings, nachos and burgers but also throws in trendy Toronto foods such as fried chicken, sliders and bibimbap.  As per normal, I am drawn to anything with a fried egg, so the Pig & The Egg ($12.95) sandwich seemed like a good call, described as a bacon focaccia sandwich with a fried egg, sausage, bacon, pulled pork, American cheese and braised onions.  The bread would have been divine even if two slices of bacon weren’t etched into it. The egg was cooked properly…giving me a yolkasm (meaning the feeling you get when you pierce a yolk and get the perfect drip).  The triple hit of pork worked as well.  It was a gimmicky sandwich but one I’d order again. We asked for the fries to be upgraded to the infamous garlic ones which they gladly did for a couple of bucks. They were well seasoned, unique and perhaps infamous but  I think the bar has been raised for terrific fries  and these fell a little short, tasting more cafeteria than downtown Toronto bar.

Sticking with the egg theme, we decided to give the bacon and shrimp bibimbap a try.  Garnished with avocado, kimchi and egg planted  atop a bed of rice,  it was a noble attempt at this signature Korean dish. The avocado was ripe, the kimchi was decent and the shrimp were cooked perfectly and in reasonable number and the egg produced another yolkasm (this could be my first multiple).  The accompanying hot sauce was thick and delicious, a nice change from the Frank’s that dominates many other menus around the city. If anything the bacon was scarce and almost absent and the dish could have used the saltiness from a seasoning perspective.

Back to the Coyote Ugly thing.  The water spray was out of the question. Unfortunately, the dancing wasn’t.  Halfway through a bite of sandwich, the manager (also a dude) hopped on the bar and greeted the crowd.  A chant of “Dance, Dance” ensued and I hoped something would prevent what was about to happen. Instead, Zack joined him on the bar and a Dance, Dance revolution session broke out. I was speechless.

Duke’s Refresher + Bar is more a bar than a restaurant located in an area which is desperate from nightlife other than strip joints and pubs. They offer unique drink options like taster size beer for less than $1.50 and the Einstein club. It likely won’t win a slew of culinary awards, but the food (at least what I tried) was decent bar food that matched the overall theme of the place. The staff is friendly,courteous and fun although this may be a bit a crap shoot depending on your expectations. In my case, maybe I expected walking onto the set of Coyote Ugly but instead ended up as  an extra in an odd episode of the Big Bang Theory meets From Dusk Till Dawn.