As I’ve frequently stated, the restaurant industry parallels the music industry.  Both are filled with experiences that will forever be etched in our brains. In other cases, certain foods and/or restaurants can be one-hit wonders in the same fashion as “flash in the pan” singers.  By defintion, the saying flash in the pan has nothing to do with food but it sounds pretty good.

1998 was a bad year for music.  The Billboard number 1 song for the entire year was was “Too Close” by Next (insert cricket sounds).  It was also infamous for having a number of charting songs by one-hit wonders including:

Perhaps the most recognizable (and certainly most applicable to this blog) is number 65  “Are you Jimmy Ray?” by the appropriately named Jimmy Ray. Despite his brilliant lyrics and video featuring an array of hip-pop and cowgirl cheerleaders flaunting pom-poms and doing double dutch, this Chris Issak crossed with Ricky Martin looking Brit faded from fandom rather quickly. In fact, touring with the  Backstreet Boys couldn’t keep Jimmy relevant at the time.

Another Rey recently hit the charts in the GTA.  This one goes by the name El and is the third single from Grant van Gameren’s debut album “Snax in the Six”.  The debut single, “Bar Isabel” and sophomore follow-up “Bar Raval” modernized the tapas experience along College street by equally and authentically combining decor and food to create a booze soaked snack vibe which as been copied by others ever since. The newer project, El Rey, on the other hand, launched on the border of Kensington and in the midst of a number of sleepy cantinas and tacquerias down the street and vaulted Mexican cuisine with a flare similar to the previous hits Isabel and Raval.

The two page menu consists of a page and a half of booze and a short row of snack foods highlighted by tostadas, snacks and a few other common Mexican specialties.  There are almost a dozen mezcals to go along with a few beer choices (local, Mexican and European) and wine selections.  Perhaps the paramount drink is the elusive “open windows”.  This cocktail is a must; an refreshing blend of the aforementioned mezcal plus some tequila, lime, pineapple which is finished with some chili for extra bite.  I say elusive because at one point the windows were closed and  it disappeared from the menu but has since returned (unless you go for brunch in which it is mysterious absent on the drink menu). In this case you need to beg and plead for one in a fashion similar to asking your dad for the car.

Foodwise, the tostadas are a must.  In particular, the coctel camaron ($10.50) is spectacular; a crispy corn totialla topped with shrimp, cucumber, avocado and some campechana sauce.    Honorable mention goes to the grilled skirt steak ($10.50) and octopus ($11.50) tostadas as well.  Each offered a unique taste driven but the use of different sauces and complementary ingredients to enhance the properly prepared proteins. Authentic, simple and delicious.  The bean and cheese quesadilla, on the other hand, didn’t get a whole lot of excitement from the table.   In addition to looking like a hot mess, it lacked any punch even when you tired to lather it with any of the provided accompaniments. 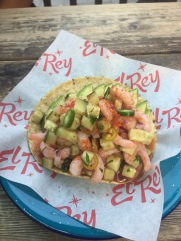 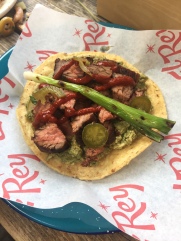 El Rey is another successful hit from the discography of Toronto’s Grant van Gameren.  The cantina breathes authenticity in its commitment to simple dishes and decor unlike the exaggerated and khabouthic demeanor of other establishments. As a result, it pumps out hit after hit from both a food and drink perspective. Its vibrant and current drink list is refreshing  both in choice and the fact it steers clear of bourbon-based cocktails and other overdone potent potables which saturate other snack bars in the area.In the end,  the fluidity of the food, drink and vibe allows for seasonal foods and current concepts year round, even when snowbanks and road salt threaten the sunny aura of a full Mexican experience.

As for Jimmy, the other Ray…have no fear…he gets knocked down but he gets up again.  Rumour has it that in a month Jimmy will be back after almost 20 years with his comeback album called “Live to Fight Another Day” just in case you are one those who wants to know.