Day two started with another trip down Magazine Street but instead of ending up in the core of the Garden district I stopped a bit early at Surrey’s cafe, another of the 10 or so DDD in the New Orleans area.  Surrey’s is a breakfast/lunch juice bar. The menu items include some of the standard fare for both meals plus a few choices with a Latin flare.

The place is rustic or run-down depending on what side of the foodie line you stand on.  You know what I mean… wobbly tables on an uneven floor with mismatched chairs and confusing art on the wall.  That said, the waitstaff was attentive and the dude was quick to recommend a few of his favorites.  He talked me into the $11 corned beef hash.  The spin was the addition of both boudin and andouille sausage. It was a delicious and hearty portion which I finished off with a few liberal splashes of hot sauce.

In the end, Surrey’s is your cookie-cutter hipster breakfast joint characterized by a seemingly necessary shottiness.  In this case, there is a Latino flare added…kind of like Corona’s as opposed to Cora’s.  Decent food and a decent vibe providing you go at off-peak times.  Otherwise, you’ll be waiting a while.

Lunch was another example of me living out my PVR fantasies.  Instead of a DDD, I opted for Toups’ Meatery in the Mid-City.  Not only had Issac Toups been nominated for numerous James Beard awards (including 2016 in which he lost out to the chef of my dinner destination), but he also was a finalist on the popular competition show Top Chef.  Toups’ promises a meat heavy experience with a Cajun twist served  in saloony type scenery. Armed with a carnivorous attitude, I delved into the lunch offerings while doing my best to avoid anything related to salad which meant a smorgasbord including  a cheese board, meatery board, Louisiana crab claws and a side order of cracklins. All were quite satisfying but I really enjoyed the crab claws.  They were served so they could be eaten hand held like artichoke leaves.  The sweet and sour of the pickled pineapple and the heat of the Thai chilis made for a number of exciting bites.  They had a bit of that mindless shoving popcorn in your face effect. With a copious amount of  fat and sodium, the cracklins were a complete exercise in arterial challenge.  I would have been surprised if they were anything short of tongue-tingling. 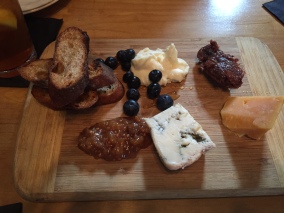 Meatery Board $25 and Pork Cracklins $8

In the end, Toups’ was a good example of a charcuterie shack with a southern spin. I would be naive to think the small amount of omega-3 in the crab claws offset the saturated fat but the Cajun flare they added certainly increased the NOLA authenticity and reminded me I was in the general proximity of the Gulf Coast.

It was back to the garden district for dinner.  The destination was La Petit Grocery who’s chef, Justin Devillier, was the 2016 James Beard winner for the South region.Unlike the industrial look, the interior of this Magazine Street eatery looks like a place where you might court a southern belle.  The cocktail, appetizer and main I ordered are no longer menu (a reflection of the tardiness of my blogs) but these items were still a good representation of what to expect at La Petit Grocery which is New Orleans first flavours with a little Europe thrown  in.  The alta cocktail, which was a combination of booze from Italy to Mexico and accented with citrus flavours, resulting in a refreshing summer drink.  The fresh green garlic spaghetti was the perfect bed for the sweet crawfish tails and the crispy pork confit was teamed with modernized southern classics including pickled collard greens and dirty rice with a mustard jus which brought it all together.   The wine list is diverse and tackles all price ranges including the middle of the road ones we indulged on such as the Domaine Jean Collet & Fils “Montée de Tonnerre ” Chablis 1 er Cru 2009 for $70 and Oregon’s Moises Wahle Vineyards Willamette Valley 2008 Pinot for a few bucks less. 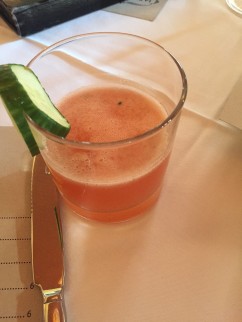 In the end, day 2 was a bit of everything; from rustic and run down to carnivorous and classic chic James Beard favorites which speaks to the fact that New Orleans has evolved into a scene beyond Cajun and creole.  That said,  they seem to ensure they protect the cuisine of Louisiana’s unique culture and history as well. I would need day 3 to see if this is always the case.