I had a dismal month of blogging in November, primarily due to the fact that my real job gets in the way when it’s busy.  I hope December is better. Speaking of busy, the every day trails and tribulations of life lead one to fall into rhythms of the present.  Aided by facebook, which has seemingly rewound time and made friends of the past friends of the present, I made a commitment to myself to reconnect with some of these friends and personally I see no better way to do it than over a bowl or plate of something.

I was a small, quiet kid who had a crooked haircut and wore Toughskins, which were corduroy pants with reinforced knees meant to withstand the harsh treatment an 8 year old had to offer.  I didn’t understand why people laughed at “Taxi” and why that old man Edward Woodward was scary as “The Equalizer”.  I liked when my mom brought me to the hotel bar down the road from my grandmother’s house because I could eat all the maraschino cherries I wanted. I went to a tiny school in Sudbury so whether I liked it or not, I had to hang out with a small group of people…in Sudbury. I got the hell out as soon as I could and somewhat lost track of 90% of those in my past life until Facebook. Now, I have reconnected with historical figures in my life ranging from elementary school to university.

It seemed totally logical to meet a friend I haven’t seen in almost 30 years at Han Ba Tang, A Korean joint in North York (I keep thinking it’s called Hang Ten after the company with the big foot slogan that kids cooler than me wore although we lived no where near waves bigger than those made from a 20 HP motor on Lake Ramsey). What drew me to this place was not the easy to remember name ( I forget it every time) but the fact that it scores one of the highest ratings on Zomato. That and the fact that 2015 appears to be the year of Korean food in Toronto and I wanted to compare it to Korean Cowboy and other similar eateries scattered across the GTA.  Plus, we both decided that we should have something that didn’t exist in our Sudbury days where Asian food was limited to sweet and sour chicken balls at the Pagoda.

I arrived, went to the bar and ordered the Caesar on fire. The twist was the addition of jalapeno soju.  I was tempted to ask the bartender for ID since he acted like a teenager.  This perception was aided by the fact that he opened up a recipe book and meticulously measured every ingredient into a Steamwhistle pint glass only to realize after the fact that he had no straws long enough for the glass.   It was good but a full pint of caesar makes for a big drink so the flavours were somewhat diluted even with a short straw.

Dish one was the Kalbi salad ($10) which highlighted the short ribs in a forest of romaine, onions, bell peppers and an onion dressing. It was topped with some deep fried onion as well.

One cannot go to a Korean restaurant withour sampling the tacos so I ordered the spicy pork, kalbi and unagi trio.  The shells were oddly shaped and the fillings was flimsy for $4-6 bucks each.  Flavourwise, they were ok but overall the touted tacos were a bit of a let down.

The kimchi pancake was fantastic.  Laced with bacon, mushroom and pepper it was browned perfectly which maximized both taste and appearance.  It had great textural contrast as well. 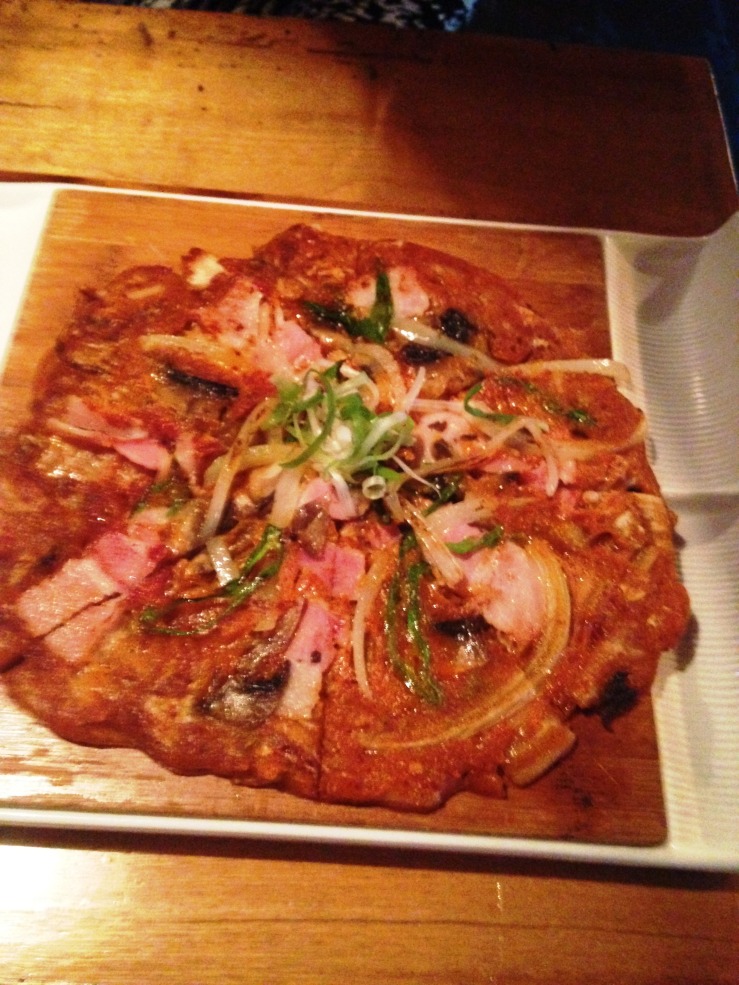 I love rice cakes and Han Ba Tang’s were no exception.  These were filthy good and reminded me of days of warming up a can of Campbell’s mushroom soup after school which was well in line with the evening’s theme of reminiscence.

Finally, we ordered the black calamari which was coloured with a roasted seaweed sauce,further seasoned  with baby dried shrimp  and garnished with cucumbers.   The calamari was cooked well but it was little too much fish on fish flavour.

Before fall foraging became cool, Korean was all the rage which saw Han Ba Tang and other snack/bar food joints vault up the charts. Traditional soups, rice cakes, pancakes,  tacos and wings are served with both a taste and an environmental twist. Instead of the flat surroundings of some the College street eateries, most of the new places offer fancy drinks, loud music and a very North American vibe. There’s a fun, thoughtless innocence to these places which is often exemplified by…let’s say naive bartenders who need a manual to make a drink.  One can only imagine what would happen once the Karaoke machine goes full throttle and  “Crystal Chandeliers” by Charlie Pride fills the air.

In the end, Han Ba Tang is a bit quirky, a bit trashy and a little fun.  The tacos were a bit of a mess but otherwise the food was good and not too silly of a price. Although I don’t think it’s a 4.7 on zomato, it sure as hell beats heading to the Pagoda with a crooked haircut.

As usual, I try to predict the wacky world of food trends.  It’s like a horoscope…I get a few right and a few wrong every year but it’s fun nonetheless.  I think there will be a trend toward more interactive dining experiences. From a food perspective, I think extreme tastes (sweet, sour, bitter, salty and umami) will highlight menus: Here’s what we can expect in 2015:

Dim sum service doesn’t have to be limited to weekends.  Places like State Bird Provisions in San Francisco and Ma Peche in New York have made tableside service the norm.  A little closer to home, Buca Yorkvile carves branzino crudo while you watch.  Watch this trend to explode in 2015 as diners demand a more interactive dining experience and restaurants see the opportunity for a sweet price mark-up.

Look for greens like hickory, endive, dandelion and maybe even radicchio to grace salad plates.  The strong bitterness and varying colours and shapes will be like playing lego for the palates of foodies everywhere. Even better, it might come with a housemade honey/maple vinaigrette for a great contrast.

Getting in the Game

Bison, venison and maybe even elk will compete with beef on menus in 2015.  The strong, gamy flavours will be more in demand than the 86 ounce steaks that graced menus in 2014.  Also, look for rabbit to hop onto menus as a substitute for chicken or pork.

Half the hipsters I see look like these lovable hillbillies, so why not eat the damn stuff too.  I’m surprised duck hasn’t been deemed the other “red meat”.  Although it has never declined that much in popularity, its unique flavour and versatile use makes it a strong candidate to soar up the ranks of fowl in 2015.

It’s no secret that the pistachio has been the most aggressive ad campaign to come of the Golden State since the California raisins. Once nothing more than a snack food which left red dye all over your mouth and fingers,  the pistachio’s recent endorsement by the witty, satirical, side-part, spectacle wearing Stephen Colbert coupled with the fact they can used in everything from salads to desserts might result in “pistachio is the new walnut”  t-shirts popping up everywhere.

Dainty vegetables won’t be able to withstand the assault of extreme tastes of 2015. Potatoes provide a blank canvas for all sorts of flavours. The sweetness of  beets and carrots amidst bitter and spice should be a great compliment. Foodie favorites like sunchokes and salsify should round out a good year for the root.

The squash is longer reserved for soup. This local fall favorite is emerging as a player across the board.  It’s a great base for vegetarian dishes and pairs nicely with a number of spices including clove, nutmeg and even sage, The regional production should appease the locavores and the diversity of the gourds available make them ideal for salads and even desserts.

Korean- More popular than “The Interview”

Although Korean is already enjoying popularity in the GTA, I think there’s more to come.  Twists on bibimbap and hot pots will become options on fusion menus while hole in the wall Korean joints may be chosen over a sushi bar or ramen house for a quick and inexpensive lunch.  Plus, your playstation shouldn’t  crash over a little bulgogi.

The popularity of 40 Creek whisky within what was once seen as an impenetrable rye market plus emerging players like Gibson’s in the vodka and gin world make the small batch production of potent potables is as lucrative as  micro brews.  Bourbon enthusiasts will gravitate toward micro booze whether in a clever cocktail or even on tap.  Look for tasting flights of infused shots of gins, vodkas and vermouths to wiggle their ways onto bar menus everywhere.

The Dumpling and Pancake: More than a way to describe your ass

The use of either a dumpling or a pancake as a canvas  has limitless possibilities. To date, dim sum and gyoza have been all the rage.  In 2014, we saw the emergence of savory pancakes such as latkes.  Look for both to explode in 2015.  From perogies to beghrir, the possibilities are endless. So will the choices on menus.

2015 will be a year filled with intense flavours highlighted by extreme taste profiles.  Much of the sweet may in fact come from fruits and vegetables including beets, carrots and squash.  Bitter will come from a resurgence of fragrant leafy greens  and infused alcohols.  Strong flavoured proteins such as game meat and duck will be needed to compliment these extreme tastes. Dumplings and pancakes will provide an ideal medium for many trendy tastes.  Pistachio is the new walnut.  Korean will surpass sushi and ramen as the preferred Asian provision of foodie nation. Regardless of the food, look for more options to be served tableside or in some other type of extravagant fashion. So, bring me a duck pancake atop of bed of mixed greens served under a cloche with a shot of vermouth and a pistachio cannoli pronto!