Among the many things I remember about my childhood growing up in Sudbury include these three: I was a forager before foraging was cool, I found Canadian history extremely boring and I love pierogies.  From a foraging perspective, I used to make money as a teen tackling the hills of the Canadian Shield and picking blueberries as a young member of my grandmother’s berry cartel, supplying her red hat friends with bad hips with enough substrate to produce jam for the long, cold, northern winters….at a premium price. Second, I’ve always been a science guy and despite my rather trivial mind, I’m not typically a fan of history. I typically scurry around a trivial pursuit board avoiding the yellow pie at all costs.  I’ll get back to the pierogies.

In 2014, Boralia opened along the Ossington strip (well it was called Borealia at the time because I guess one couldn’t avoid lawyers even in the 1600s) promising to pay homage to the new trend of classic Canadian fare.  Hipsters, many of which couldn’t put a tent together let alone provide a synonym for a gooseberry, are flocking here in numbers not to mention that Chris Nutall-Smith listed it as one the top 10 Toronto restaurants in 2015.  Since it was my turn to pick a restaurant for a few colleagues, I thought it was a good call.

The menu is meant to be a bit of a history lesson fused with modern day food trends.  For example, two of the snacks (the Deviled Chinese Tea eggs ($9 for 4) and Chop Suey Croquettes($7.50 for 4) are inspired by the mass Chinese immigration of the 1860s.  As mentioned, I’m no historian, but I can’t imagine groups getting together in Vancouver and having potlucks while passing around deviled eggs. Nonetheless, they were decent starters although nothing that stood out anything more than a good Chinese side dish made fresh at a food court in Sault Ste. Marie or my Gramma’s eggs sprinkled with paprika at Thanksgiving dinner did…and that’s not necessarily a bad thing. 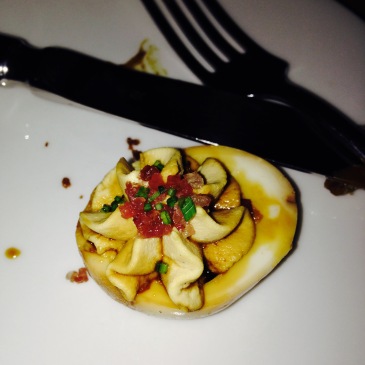 The main menu features a number of less orthodox proteins which requires some imagination although there are some safer choices for those who don’t want to recreate 200 year old Canadiana.  After some negotiation and hints from past patrons we knew (and a bit to my chagrin), we avoided the whelk, elk and pigeon and agreed on the l’éclade (mussels) $17, mushroom salad $14, bison tartare $15 and sweetbreads $15. The mussels, smoked with pine, was a reflection of the early 1600s.  Served in a clear dome with spiraling smoke, the mussels were delicately done to perfection. It’s so hard not to overcook these fussy mollusks and these were a huge success. The mushroom salad looked like a wreath of earthy colours and the hazelnut corn cake hidden in the foliage was simply addictive.  The bison tartare was a twist on the now ubiquitous modern day classic.  Instead of traditional pickles, punchy heat and an egg as a binder, this tartare utilized garlic and ginger , pickled fennel and lardo to add some fat to the otherwise lean bison.  The grilled bread was a delicious vehicle. The sweetbreads (circa 1876) made sense from the perspective of a nose to tail concept which was necessary during pre-war times  as opposed to cool in the modern era of excess wastage that we are now accustomed to.  Even if it’s not a traditional 19th century recipe (it very well may be), the sweetbreads were extremely tendered and seasoned nicely. 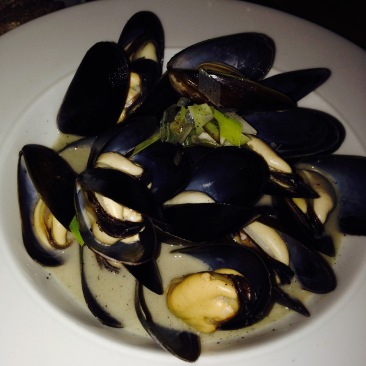 After a few drinks down but with some realization we wouldn’t shut the city down, we decided to indulge in the closest thing we could find to street meat…the bane of the spelling bee…the famous pierogi.  Whether you pick up a frozen bag for a few bucks, have a church nearby or are lucky enough to have an Eastern European family member, these delicious dumplings are the ultimate comfort food. In the case of Boralia, they had some foodie flare in that they were served on a bed of red cabbage. They were good dumplings but 3 for $13 was certainly not a price from the 1800s.

Dessert was a homey pumpkin cake with corn ice cream and probably the most recognizable  and predictable Canadian dish on the menu.  It was good but not remarkable.

The thought of foraging can take on many meanings. Traditionally, it means to live off the land.  For some, it means erecting an urban garden in a few square feet of back yard or in a flower box on a balcony. Others may perceive it as a trip to the urban Sobey’s  across the street to to buy a few kumquats. Regardless, the concept is alive and well and has trickled into Toronto’s restaurant scene.

At the same time, Canadian food has become synonymous with living on the land.  This countries vast landscapes and diverse climates makes it a cornucopia of all things land and sea.  At the same time, as Canada’s rich multicultural history continues to evolve so does its food to the point where eatables like pierogies are now considered as patriotic as maple syrup.  Put the two concepts together and anything goes. In fact, Parks Canada devotes a component of its website with an app called the Parks Canada Heritage Gourmet App which pays homage to traditional Canadian recipes.

In the end, hipsters can live vicariously as foragers through the Boralia menu. As for me, I may have payed more attention in history class in high school if it hinged on my understanding of the influence of various cultures on what we call Canadian cuisine today.

A business meeting brought me midtown for dinner.  Midtown is a place where restaurants are restaurants and not political statements or abstract expressions of social activism.  You can get an appetizer, main and dessert for a decent  price without the need for  an explanation about the difference between a starter, small plate or large plate.  The menus tend to be simple and the decor looks like a restaurants and not like Johnny’s auto shop.  Plus, you can have a conversation without having Radioactive by the Imagination Dragons blasting or listening to  Run DMC remind me about footwear:

(This is no crack at Run DMC.  I’d just as upset if Locked in the Trunk of a Car by the Tragically Hip  were blasting in my ear).

Unlike it’s name, L’Avenue is a smallish bistro on Bayview, not Avenue. It’s easy to miss with its quaint front; a freckle of the mosaic  that makes up the Leaside neighbourhood.  Like the name suggests, it focuses on french style cooking, although updated with lighter, fresher techniques and local, seasonal ingredients. There is an fairly extensive and reasonably priced list of red and white wines available  (many bottles are in the 35-50 dollar range) from a diversity of regions, Krombacher (Pils and Dark) on tap and a spattering of local and world renowned beer included a gluten-free choice as well

This night featured an oyster special which was served on a cloud of salty meringue.  They were fresh and meaty and seasoned nicely although I’m always a fan of a little heat on the side.

For my  hors d’oeuvres (or appetizers for the anglophone), I opted for sweetbreads in a promise to exchange some of them for the bone marrow at the table.  Sometimes sweetbreads run the risk over being overly greasy or gritty.  The chef avoided both and offered a simple dish atop fragrant streaks of coulis. The marrow was also served in it’s fundamental form, simple seasoned with some herbs and bread crumbs to add some crunch.

Our table’s family style commitment continued with an array of entrees which included the Fried Chicken “a la Basque”, Catalan Seafood Stew “Zarzuela” and a duck feature (we played rock paper and scissors to actually determine who would order the latter).   In summary, the execution of each dish was spot on.  The fried chicken was moist, the duck a beautiful medium rare and the scallop had a perfect char which  housed a glistening white interior.  Instead of relying on traditional french flavours such as ummm…butter, the chicken and seafood stew (as the names suggest) were  infused with Spanish flavours including tomato and saffron respectively. The duck was a bit more traditional but the addition of rhubarb  was stellar and a testament to their commitment to  use seasonal ingredients.

Here’s an interesting fact.  The pavlova dessert was named after the Russian dancer Anna Pavlova (God,  I love wikipedia).  You would think that a dish with meringue as its foundation would have European origins, but in fact Pavlova is a creation of culinary juggernaut New Zealand (although Australia also tries to lay claim, possibly fueling the bitter Rugby rivalry which exists to this day). It was presented on a plate and with a style reminiscent of tea at  Gramma’s on Sunday.  Let’s call it an endearing cheesiness.  Like the dishes before, it was well executed with a twist, in this case a tart passion fruit custard.

Calling L’Avenue a french bistro is a bit of a misnomer.  Instead of small rich portions served in the most pretentious manner, the chefs invite Basque and Catalan flavours into many of the dishes and serve hearty portions in the midst of a casual environment.

L’Avenue bistro is like a good nap. It’s not the most exciting thing but it is refreshing and satisfying.  You get Egyptian cotton sheets and a small mint on your fluffed pillow iwhile relaxing as soft music senerades you in the background.  They adhere to a theme of comfort and tradition instead of throwing down an air mattress and trying to convince you it’s cool to sleep on it while blasting 2 Live Crew and then retweeting it when you do.