Ghost hunters has been a show that has been on the air since 2004. Hosted by paranormal experts Jason Hawes and Grant Wilson who are two plumbers who set out to find things more ghastly than clogged sewer pipes.  They have filmed over 200 episodes of the show and have had a number of guest hosts with a calibre that rivals that of Dancing with the Stars including professional wrestlers Kofi Kingston (of New Day Fame), the Miz and CM punk, sci-fi idols and Canadians Colin Ferguson and Amanda Tapping and music umm…superstar Meatloaf.

I don’t claim to be an expert in area of ghosts but I’ve wondered why, with the technology available to us today, we can’t get a better picture or recording of some of our friends from beyond the grave.  I mean, google earth can take a picture of my licence plate from space so would think we could snap a clear picture of at least one ghost.  Beats headphones can pick up Kenny G breathing on a quarter rest during Silhouette but we can’t get an audible account of Father Gus and his unfortunate demise in a church fire.

Anybody with kids know they like to jump on various things to the point of obsession.  Both my youngest son and daughter got a little ghost crazy over the summer.  For my son, it was youtube ghost stories whereas my daughter was keen to explore haunted relics in the hopes of getting spooked by something more than a Tuesday night horror movie with her friends at the theatre.  So on the way down to Allentown to see some family over the summer, I decided to make a pit stop at Andy Gavin’s pub  in Scranton, PA.  According to stories, a resident ghost named George periodically reeks some fun havoc on the place by flipping the lights off and flushing the toilets.

I had some nachos, wings and a few cheap pints of Miller Lite.  The latter was probably the most ghastly thing I experienced that afternoon but for $2.50, I couldn’t complain.  My kids swore they may have heard some high pitched screaming upstairs so I’ll let them believe what they want. 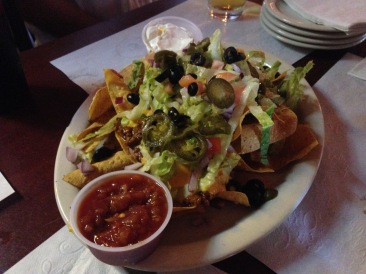 From there we proceeded down the road to the Houdini museum which is also rumoured to be haunted. It was quite enjoyable;a makeshift shrine complete with a live show by Dorothy Dietrich who, often called the female Houdini, did the Jinxed Bullet Catch Stunt which was the act that Houdini backed away from.  It is also filled with paraphernalia including posters and pictures honouring the famed escape artist.

Recently, I needed a location to meet a customer outside the downtown core  with good Italian food and ample parking. Based on the reviews,  Five Doors North seemed a good choice.  It is a well established Italian eatery located on Yonge street between Davisville and Eglington.  Although the website is quite primitive, they do take online reservations so I promptly booked a table.

In keeping with the ghost hunter theme, I’m not sure if the true origin of the restaurant’s name. I mean, it could be the fact that it is north of the city and there are five coloured doors on the restaurant’s facade but I think it may actually be a code for a  map to a ghastly burial ground five doors south.

Both the interior and exterior decor is quirky but casual.  There are tiled floors, wooden tables with glass tops protecting random pictures and foodie magazine covers (very reminiscent of the Houdini museum and the first clue that something was amiss) and brick walls showing blackboards containing the day’s specials.  It has a cozy aura and comes without the automatic pretension of some of the downtown enotecas such as  Terroni and Pizza Libretto.

Both the wine and food menus are handwritten on a standard 8.5 x 11 sheet of white paper.  The wine choice was not extensive but offered some off the cuff choices that seemed to fit the casual, quirky theme of the restaurant. We opted for a I Muri Primitivo for a respectable $45 which I thought was a fun  and rather preternatural wine to drink.

The menu is a bit all over the place, offering traditional  Italian dishes as well as a few less orthodox choices like ribs with matchstick potatoes.  Every night they feature a long and short pasta as well.  On this evening, I went with the former which was a pasta primavera which was a perfect al dente, heavy on the garlic and not overly greasy.   For the main, I ordered the branzino special which was served with a hodgepodge of vegetables including a paranormal corn, asparagus, lima beans and a red pepper puree. Although  I found the combination a bit aberrant, the fish was nicely prepared and it worked.  I also ordered the green salad which was very green and even a little purple.

Despite the pleasant service, funky wine and good food, I had  a vibe that something was amiss beyond the funkiness of the place .  I brushed it off until I went to the washroom.  I did my business and went to wash my hands in the small sink.  I looked in the mirror and an apparition appeared.  At first I was shocked. She was blond and wore red so I immediately dubbed her the “lady in red”. When I got my wits back, I reached for my phone in the hopes I could snap a picture, worried that the quality of my camera was too good to snap a picture of a ghost since the only pictures ever captured have been grainy pictures in bad light. That said,  as demonstrated by my blog posts,  I’m often criticized that I have no understanding of basics of photography such as focusing,  lighting or positioning  so I thought it would be ok.  Although my hands were trembling, I managed to secure the shot.  I tried asking her what she wanted but all she did was smile.  She was holding something white.  At first I thought it was a cloud or a ghost baby but a closer inspection showed me it was Cottonelle toilet paper.   Between her smile and the silent promise of soft hygienic products I was almost lured into the cottony abyss but I managed to break the spell and quickly escape the chasm of temptation which was the men’s washroom.  I returned to my seat likely as red in the face as her shirt and asked for the bill.

Ghost hunters has been on the air since 2004 and has hundreds if not thousands of followers.  I have a science background and have always been taught to adhere to an evidence based model which means there should be sufficient and  irrefutable proof that a concept is true before I believe it.  I’ll be honest, despite my children’s insistence that they heard screaming at Andy Gavin’s, I was reluctant to believe.  My experience at Five Doors North may have changed that.  I think I will email the show and maybe they can ask  Bear Grylls to co-host and demonstrate some urban paranormal survival skills.

Until then, if you are looking for an Italian eatery outside of the downtown core with a funky environment, decent menu and friendly family service you should consider  Five Doors North.  If you’re walking, however, hit the audio record button on your cell as you approach (let’s say around 5 doors away)  in the event you can detect some electronic voice phenomenon.  One last word of advice, despite the words of Chris Issak, beware the lady in red.

Disclaimer:  I do not believe that the woman in the mirror was an apparition. Although odd, I’m quite sure it was advertisement in which a young, happy woman watched me urinate and then offered me some soft toilet paper. The author of this blog does not accept responsibility for consequences of eating at this restaurant including but not limited to hauntings, garlic breath or leaving really full.