With early April’s reminder that winter wasn’t quite over, it opened the door for me to rewind the clock a little and talk about Winterlicious. I’ve always been on the fence about this beloved annual event.  On one hand, it allows the masses to have a taste (literally) of one or more of the hundreds of restaurants that make up Toronto’s proud and diverse culinary culture.  On the other hand, it is a little artificial and contrived. Some the city’s restaurants stay at arms length from this festival and those that do participate often offer menus that are far from representative of their everyday vibe.

I figured I’d bring my dad out for dinner during Winterlicious.  I chose Barnsteiner’s ($35 set menu) for three reasons.  First, it’s located outside the downtown core. Two, it was relatively new on the scene. Thirdly, it actually had a menu that actually bordered on the side of creativity, offering both 5 appetizers and entrees as well as three desserts.  Barnsteiner’s is named after chef and owner Herbert Barnsteiner who, with his wife Michelle, ran the Corner House with great success for a decade and a half.  After a short break, they took over the old John and Sons’ oyster house just south of Yonge and St. Clair.

The vibe is a busy European bistro  feel.  The actual floor plan is a bit of a maze with lots of twists and turns and awkwardly placed tables.  Memories of the old oyster house exist, especially the ceiling mirrors which used to reflect visions of staff shucking oysters on the prep stations but now have benign angles that just miss most of the kitchen’s angles.

I started with a paper plane, a cocktail with  bourbon, montenegro, aperol and lemon. I’d put it at mid-range in terms of bourbon cocktails available throughout the city.

Among the starters, we decided to split the smoked chicken salad with
grilled oyster mushrooms, arugula, fois gras croutons and finished with a raspberry-sherry dressing and the garlic and chili grill shrimps with crusty bread, and salsa verde.  The salad was a smart blend of colours, textures and flavours.  The sweet berries and dressing was dumbed down by the smoky chicken and the peppery arugula was a smart medium.  The shrimp were cooked to perfection and simply but nicely seasoned with the salsa verde. 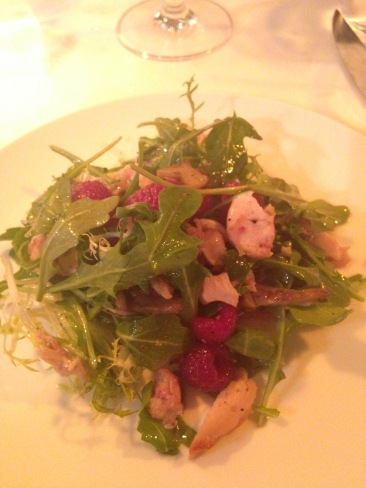 From among the entrees, we opted for the  whole roasted black angus striploin with
crushed fingerling potatoes, crimini mushrooms, red-wine jus and the venison stew
braised in juniper red wine sauce with spaetzle and brussel sprouts. I don’t often order steak in a restaurant but I quite enjoy a good roast.  It was a simple dish but very well executed from the beef itself to the flavourful au jus.  The stew was the perfect winter dish; hearty yet refined.  The meat was super tender and the spaetzle was reminiscent of the chef’s proud German heritage. 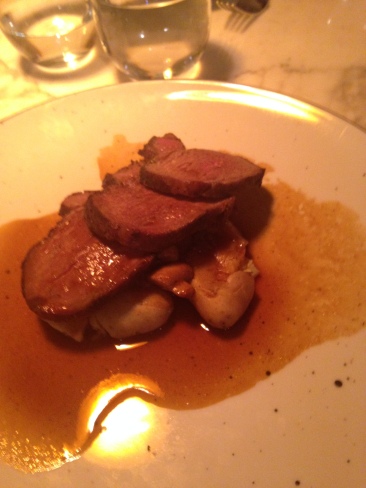 For dessert, we chose from both ends of the spectrum, opting for the comforting apple and cranberry crumble and the more delicate lemon panacotta with toasted coconut. Once again, no complaints with either one as they were both well executed and exactly what I expected.

Although the Winterlicious experience is not always a fair representation of the essence of a restaurant, Barnsteiner’s succeeded in making me want to come back. There was good variety as far as a winterlicious menu goes and all the offerings I tried were well executed.  I plan to return to try one of the numerous menus offers such a the many flatbreads, seafood options and chef’s homeland dishes.  In fact, I was asked by a colleague for a last minute dinner suggestion for her team and I suggested here.  I called and they were able to accommodate 8 people with a little shuffling.  Although I didn’t go myself, the feedback from my colleague was a quick  twitterlike …”it was really good! And lots of fun.  Very good price wise.” I nodded in agreement as I thought $35 for a solid winterlicious meal wasn’t bad either.