Stop one of my annual summer road trip was to the heart of New York state to check out the Culinary Institute of America  (CIA).  Its flagship campus it located in Hyde Park which also happens to be the birthplace of Franklin D. Roosevelt. Unlike the other CIA, FDR had very little do with the cooking school. Although both CIAs were formed a little more than a year apart following WWII, the school was originally founded in Connecticut and did not relocate to Hyde Park until 1970.  The CIA (the school that is)  has produced some of America’s most notable celebrity chefs including Marcus Samuelsson, Anne Burrell, Michael Symon, Duff Goldman and the late Anthony Bourdain.

We arrived in time for the daily 4 pm tour which is conducted by students within the school.  Our guide, Ezra, showed us many of the ongoing stations and classes within the main building which ranged from fondant to rock candy to baguettes.  We were told of the hours of home practice required to perfect the tournee cut, a skill often used as a screening tool at interviews  all over.  There was an interesting discussion about the differences between the baking  vs cooking stream of students.  The bakers are meticulous (aka boring) while the cooks tend to be quite eccentric. (aka annoying).  It was quite surprising how the tour did nothing to mention the aforementioned celebs and seemed more a recruitment tool in the event I wanted to quit my job and enhance my cooking credentials beyond a “Dad’s grillin’ so everybody’s chillin'” apron.  I’d clearly opt for the cooking side of the curriculum and more specifically the culinary science arm so I could use words like “oxidative enzymatic browning” with an enhanced confidence.

Of note on the campus tour was “Old Diamondsides”, a sculpture representing the Atlantic Sturgeon, a vital species inhabiting the adjoining Hudson River. The life size   depiction is constructed from hundreds of pieces of recycled cutlery  and is meant to represent the struggle of such a magnificent species to survive in spite of over fishing, pollution and other human interference.

Although Guy Fieri is not an alum of the CIA, I would feel remiss if I did not venture to the Eveready Diner,  Hyde Park’s lone contribution to the DDD empire.   Characterized by neon lights and chrome finish, this old school diner promises big portions and great desserts and didn’t disappoint on either front.  The spinach dip was a bit watery but flavourful.  The consensus at the table was that the chicken salad, burger and mac and cheese were all quite acceptable although the potato salad was a bit bland. Plus, a sunnyside up egg on a burger can brighten any plate up. My mom (caught off guard in the picture above) is till talking about the cheesecake (which i think she ate before i got snap a pic). 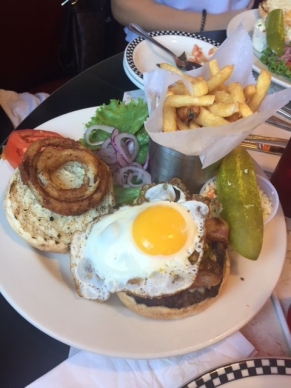 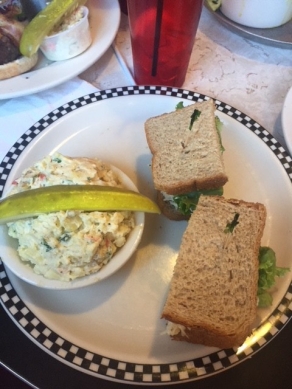 The day ended with a hotel stay in New Paltz, New York. All  I can say is that it is one of the more interesting U.S. towns I have stayed in.  I should have known when I checked into the Hampton which was recently built directly adjacent to the Put Corner historic graveyard which houses the remains of 120 residents of the town placed between 1801-1880.  Two celebrity graves, that of heavyweight boxing champion Floyd Patterson and Oscar Tschirky, inventor of the Waldorf salad, are also buried in town but not in the plot hugging the Hampton. A visit to the really creepy dollar store down the road was surely a foreshadow for my visit to Bangor the next day and easily could have been the setting of supernatural anarchy in a Stephen King novel. Who needs Pennywise when you’ve experienced the horrors of a New Paltz dollar store.