I was pondering how to incorporate the recent passing of David Bowie into a blog post when serendipity occurred. I went to dinner at Nana and the soundtrack was nothing but the Thin White Duke.  Starman, Heroes, Jean Genie and a number of other classics blasted from the rafters, reminding me that Bowie was truly a chameleon in that a skinny white dude’s music fit perfectly within a crowded Thai restaurant.

Social media has changed the way we recognize dead celebrities.  My facebook was littered with tributes from people telling the world what Bowie meant to them from a fashion and music perspective.  Others credited him for making them feel unapologetic about being different and how they changed his life. Maybe I’m just a clueless moron or a heartless muttonhead (which I think is the perfect insult for a person who writes about food), but his impact on my life was less exciting. That said, I appreciated his quiet and private approach to stardom.  He lived by example and not by sponsored endorsements or fabrications.  From a music perspective, I would always stop on a Bowie song if I was flipping through my Sirius.

I tried to find some sort of relationship between Bowie and Nana and the closest I came was that Nana (along with a whole bunch of other nana’s) were lyrics in a 1968 song called Ching-a-Ling written by Bowie as part of a trio named the Feathers which also consisted of his girlfriend at the time and guitarist John “Hutch” Hutchinson.

Looking for a link between Bowie and anything related to food also proved a dubious task. I did find one interesting story however. Prior to Bowie’s leap to permanent stardom in 1969, Bowie briefly appeared in a rather psychedelic  commercial for Lyons Maid ice cream Luv lollies as a way to make a few bucks. The following clip is worth a watch, but  here are a couple of interesting facts:

Nana is a spinoff of Khoa San Road, the highly successful downtown Thai restaurant. According to the website, Nana means meeting place.  According to me, it means daycare since the plastic red seats and big tables, looks more like you find them at a babysitting service than an Asian street market . Unlike KSR, Nana takes limited reservations which a least gives you a hope of eating without a wait.The menu offers KSR favorites as well as a spattering of items which represent the Thai street experience.  Each dish is described in detail on the second page of the menu which makes things easier for people who don’t know the difference between pad mama and pad prik.

They offer a small selection of wine, a few unique draughts and a Thai themed cocktail list. I started with a Silom Sour which incorporated Thai flavours such as ginger, lime and chili in a very enjoyable cocktail. It was topped with chili powder which surprisingly numbs the lips in seconds.

Tom yum soup is usually my go to measure of a great Thai experience and I thoroughly enjoyed Nana’s version. It was a true testament to intense Thai flavours boasting a great level of heat and plenty of chunky mushrooms and tomatoes. It was one of the better Tom Yum soups I have had in a restaurant.

We ordered a variety of mains for table including pad mama with hot dog, pad prik king with chicken, pad thai bo lan and pad see ew.  We also tried to get the mi ga ti with pork which looked incredible based on the description but was unavailable.  In general, the dishes are in the $15 dollar range for a slightly skimpy portion size.  The pad mama, supposed the mac and cheese of thailand, was gimmicky and resembled something a creative university student might with make with leftovers.  The pad prik king was the best dish of the night.  The chicken was tender and bursting with heat and extreme Thai flavours.  Both the pad thai and pad see ew were a terrific testament to two of Thailand’s most recognized noodle dishes. 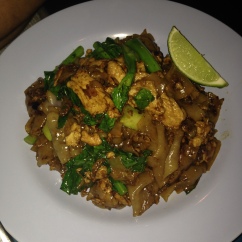 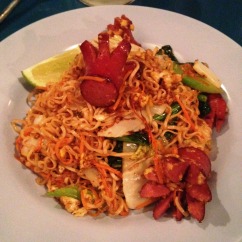 I never get excited about Thai desserts but the roti kuay (buttered roti dough, cooked and folded with banana) was a decent finish to the evening.  The table split an order which was plenty, especially after a mass infusion of rice and noodles. Cutting it was a dubious task, however, since there are no knives available to customers (once again reiterating the fact that this place is probably in fact a daycare).

Nana is a funkier version of its sister restaurant, Khao San Road.  It is smaller but does entertain the thought of reservations which made it a feasible destination for my group. The draught list is small but good and the cocktails are smartly constructed. The Tom Yum soup is among the best around and the dishes pay commensurate homage to Thai flavours.  I’d highly recommend the pad prik king and you won’t be disappointed with any of the noodle dishes.  The pad mama is a good gimmick but not a great dish.

In the end, Nana is a place where you can enjoy pretty good food in a communal environment and if you’re lucky, you may even hear some Bowie in the background or get to  play Simon says, I spy or clapping syllables to the names of Thai dishes such as por pia tod sai moo sub kub nua pu.