I went to Kasa Moto a few months back and I’ve been struggling a bit with a concept to go along with it.  I’ve pretty much exhausted the Real Housewives so I was in a state of pop culture writer’s block.  Magically, it came to me while I was watching the 2016 Golden Globes because it is a perfect  example of something that is synonymous with hype and phoniness of Yorkville. I’m not a Hollywood zealot but I do love the dynamic and psychology around celebrities.  I’m not talking TMZ; instead I’m referring to the pathological perception that exists in the world of the famous.  I’m no Ricky Gervais, but there are a number of observations I made during the globes that correlate nicely with Avenue and Bloor.

10 “Yorkville Personas” that I saw at the 2016 Golden Globes

Bonus: Ben Mulroney’s post Golden Globe commentary was ridiculous.  Maybe bragging about the fact that J Lo actually stopped to talk to him makes him feel a little better about being the less popular of the two silver spoon fed sons of a former Canadian Prime Minister.

Kasa Moto sounds more like a Victor Hugo character than a fancy Yorkville destination but I’m sure many of the area’s regulars were thrilled that it brought a face lift to the namesake street after Remy’s had become so passe. This renovation  has resulted in a big, bustling and oddly laid out dining room that in some cases gives you a surprising amount of privacy in the midst of a few hundred other people, especially if you are seated on the bottom level. Although it is generally Japanese, it is less sushi (although there is a small selection) and more izakaya without the need to remove shoes or deal with happy people and an artificially  loud environment.  The menu is divided into numerous sections including hot, cold, robata, large plates and ends with the sushi/sashimi platters and maki rolls.

While perusing the menu,  I ordered  the Origami in Flight, a bourbon based cocktail finished with chartreuse and citrus.  It was respectable cocktail at a relatively acceptable price of $14.  This was followed with a carafe of one of the many sake choices available from the bar.

We started with some edamame $7 which was served with nanami  and hoisin sauce on the side. The hoisin sauce itself was delicious and the extra heat was a  brilliant  spin on this traditional staple.

From the cold menu we agreed on the hamachi ponzu ($18).  The crispy carrot seemed a little odd but added a nice contrast to the fish. The quality of the hamachi itself was good and it was seasoned nicely.

From the hot side, the kinoko salad ($13) was really only a salad because it was in a bowl. Otherwise, it was more a spin on a  mushroom tempura than anything.

Robata is one of many words which describe Japanese barbeque.  The literal definition is slow-cooking using  charcoal.  From this menu, we ordered shrimp ($16) and pork belly ($12). I’m not sure if the shrimp is still on the menu but it was bland and overpriced.  The pork belly on the other hand, was nicely rendered and melted in my mouth.  It was nicely complimented with a ume glaze which added a great sweet flavour and caramelization to the dish. 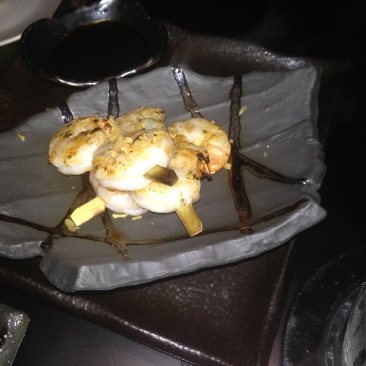 The kamameshi ($18) is a rice dish mixed table side. In hindsight, it was probably the wrong dish to order since the flavours were very similar to the kinoka salad.  Regardless, I wouldn’t have been a fan even if I didn’t have the precursor.  It was a greasy bowl of overpriced mushroom rice.

Another favorite at many Japanese drop-ins  is the hot stone as a table side cooking vessel. Normally, an advantage of this cooking style is the ability to use less expensive meats such as tongue since you can use really thin cuts.  In Yorkville style, however,  Kasa Moto glamourizes it with either a 4oz Amercian Waygu cut for $24 or 5oz of Japanese Waygu for $80. We opted for the cheaper of the two which was served with a house made ponzu and steak sauce.

I couldn’t leave without trying the sushi, so I reverted to my standard choice of spicy tuna rolls.  They were average at best and overpriced at $12.

Izakaya restaurants are the rage in Toronto but have typically opened as boisterous and inexpensive destinations.  Kasa Moto is like the golden globes of these trendy eateries.  It smartly glamourizes the experience in Yorkville fashion by offering a classy decor, professional service and upgraded ingredients at a premium price.  (eg. Waygu beef instead of a cheaper cut for the hot stone).  In many cases the food was prepared nicely.  The pork belly was rendered and seasoned with brilliance and the simple twist on the edamame was divine.  On the flip side the shrimp was bland and the kamameshi was mushy and oily. Most of the menu was rather overpriced but this is to be expected in the heart of Yorkville.

In addition, if you go there is a good chance you will see one of many of the aforementioned Yorkville personalities in full action.  The BFF girls are almost a guarantee and I had the privilege of being within earshot of  “thinks he’s deeply philosophical but actually shallow guy” whose ridiculous banter was lapped up by”lives as her character girl”.

In the end, it was a decent dining experience but if you want true izakaya there are cheaper choices in the GTA that will give you food just as good. That said, a visit to Kasa Moto  will give you countless opportunities to witness the best of Yorkville personalities even if you if you only end up being  a seat filler.